10 Second Ninja is a puzzle-platformer reminiscent of classics like Super Meat Boy and Fez. You will have to complete lots of levels requiring both skill and mental capacity. The quicker you complete these levels, the more stars you'll get, which will allow you to unlock additional worlds. Thwart the evil plans of Robo-Hitler In this game of platforms and reflexes, you take on the role of "the ninja," a hero upon whom the entire fate of humanity rests. As the only thing standing in the way of an invasion by Robo-Hitler and his hordes of minions, you need to blast away at any Nazi robots heading for you. All this while never exceeding the limit of 10 seconds per level, which will become increasingly full-on as the difficulty level increases. Discover a nervous and demanding gameplay Each level of the game takes place in the same way: you have clear the room of Nazi robots as quickly as possible, all while avoiding the pitfalls. It's rare to complete a level the first time and in the same way as Super Meat Boy, 10 Second Ninja is intended for patient players who love a high level of difficulty. Some of the levels on offer are really hard, and improving your time to get more stars will sometimes be a true challenge. The handling in the game is rather nice, although we'd recommend using a gamepad rather than a keyboard. But it's actually very fun to jump on the walls and throw your shuriken with the precision of a sniper, while slicing in half those pesky robots with your sword. Fabulous! Own animations but a realization that lacks personality 10 Seconds Ninja offers a very clean realization overall. The animations and sound effects are very successful and manage to give a real sense of fluidity to the whole game, ensuring that it's a pleasure to play. Everything is carried out with humor, and it's difficult not to poke fun when faced with the caricatural Robot-Hitler and the absurd orders he shouts at his henchmen. Once into the game, it has to be said that it's all sadly lacking in personality. The esthetic of the levels and the characters is too minimalist and doesn't really make 10 Second Ninja stand out from all the other puzzle-platformers. It's actually too bad, especially since the same sense of banality affects the gameplay, making it too similar to other games in the genre. A good game that remains a little too classic Become the strongest ninja of all time and bring down the tyrant Robo-Hitler, and there you have an enticing piece of software! Especially since 10 Second Ninja is a success in terms of gameplay, which is both edgy and enjoyable to play while providing a challenge to the toughest of players. Among its faults, we have to deplore the lack of originality compared to many other puzzle-platformers in the market (Super Meat Boy first and foremost). 10 Second Ninja is a very good game, and best suited primarily for enthusiasts of the genre in need of new titles. 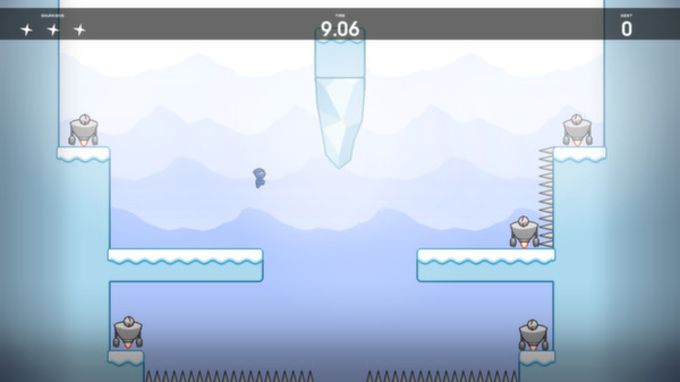