For those who remember the heyday of Lucas Arts (Monkey Island, Sam'n'Max Hits the Road...), then Gemini Rue is worth a look. This point’n’click adventure game is part of the new wave of games in the genre, and from the now legendary games publisher Wadjet Eye (The Shivah, Resonance). A unique, dystopian universe Mixing science fiction and film noir, Gemini Rue helps personify Azriel Odin and Delta Six, two men lost in two places far away from each other in the galaxy (one being an investigator with a troubled past, the other a patient in a rehabilitation center). The universe is like Blade Runner, with its continuous rain and lowland scenery of the future, all set against the backdrop of a totalitarian society. The story in Gemini Rue is its greatest strength, and as long as you like science fiction you will struggle to put the game down before you get to the end credits! The narration is excellent and very rhythmic, and the alternation of the two characters means you can gradually discover how their stories might be related... Old gameplay that would have benefited from a good polish The gameplay in Gemini Rue boils down to exploring, communicating and interacting with elements of the decor. Combat episodes are planned and rather fun to play, but Gemini Rue fully takes on the point'n'click legacy of the 1990s, and the gameplay is now old. The game system is far from being instinctive and you have to fight using the various controls. It's a shame, because the lack ergonomics makes an already complex game even harder and makes for a lot of unnecessary downtime. Retro styling Gemini Rue is certainly not beautiful. The pixels are coarse and the artistic direction, struggles to stand out in the already-crowded steampunk genre. But the game never makes any mistakes when it comes to taste, and fans quickly forget the graphic simplicity when they focus on the excellent gameplay that makes up Gemini Rue. Note that even if the musical accompaniment is somewhat low-key, the entire game is dubbed by real actors, giving more substance to an already more than solid scenario. Our verdict: one of the best point'n'click of recent years The success of Gemini Rue is its mysterious atmosphere, its bias for pixilated graphics and the quality of the dubbing. An impeccable achievement for an independent game that's keeping fans addicted.

Cons:
"Gameplay is too old fashioned"
​ 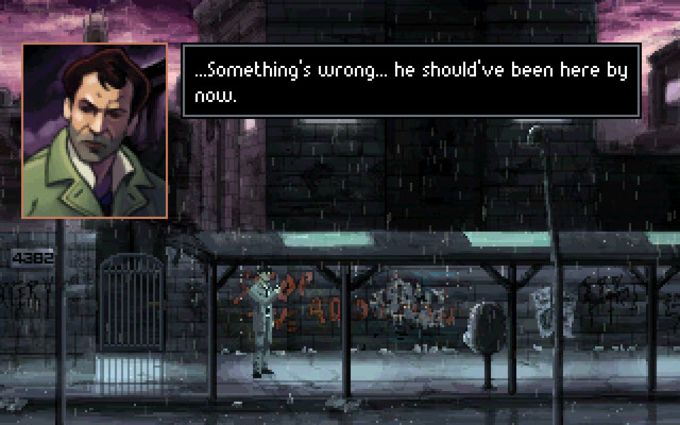